Everyone feels fear. Spiders, the boogie monster, flying, the dark, other people, clowns, heights, people are scared of anything and everything. Oleg Sherstyachenko, also known as Oleg Cricket, a 25 year old Siberian/Russian man, might have fears but the fear of height is certainly not one of them. This young man travels all across the world to climb incredibly high buildings and videotapes himself. Learn more about this man here and check out the video of his stunts below! 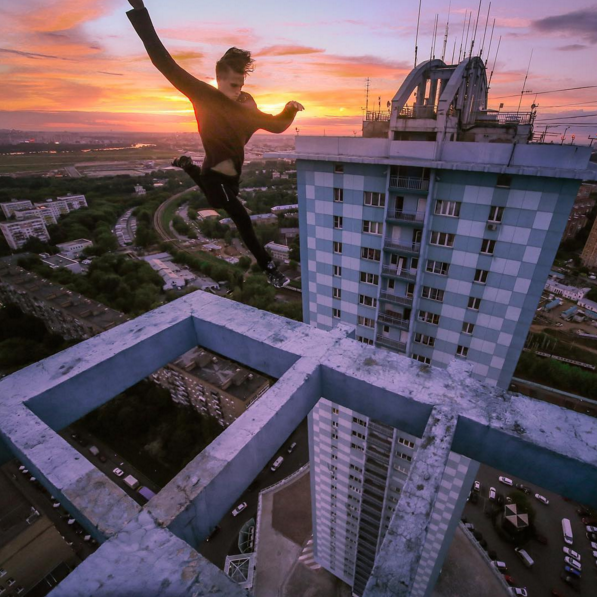 He started doing gymnastics, stunts and martial arts at a professional level at the age of 16.

After moving to Yekaterinburg when he was 17, he had a dream and went hard to accomplish it. He focused all his energy on achieving all that he’s done.

He is able to set his limits because of his experience. In seconds, he can decide whether he will do a stunt or not. These intense stunts aren’t made as impulsive decisions.

Also, he decides what his limits are. If he doesn’t feel comfortable with a stunt then he just doesn’t do it. Easy as that!

When he’s made a decision to climb, nothing can stop him in his tracks. He stays strong and always reminds himself to see the big picture in order to find the solutions he needs.

He has a tattoo that says: ‘People who think that I’m not afraid while I’m doing all these stunts, are crazier than I am.’

Not only does he enjoy climbing buildings but he also enjoys taking photographs. His Instagram page is filled with his photography work. With 1 million followers, you’re sure to see something impressive on his page.

Oleg travels all over the world to climb various buildings. He’s been to Germany, France, Dubai and Hong Kong, for example.

Oleg does experience fear but he does not express it in his photos because he wants to great incredible images for his public.

Many young Russians have followed in Oleg’s footsteps and are making similar videos and posting them on social media. Unfortunately, Andrey Retrovsky, a fellow rooftopper, died while attempting a stunt in Volgoda, Russia. He fell from a nine-story building.