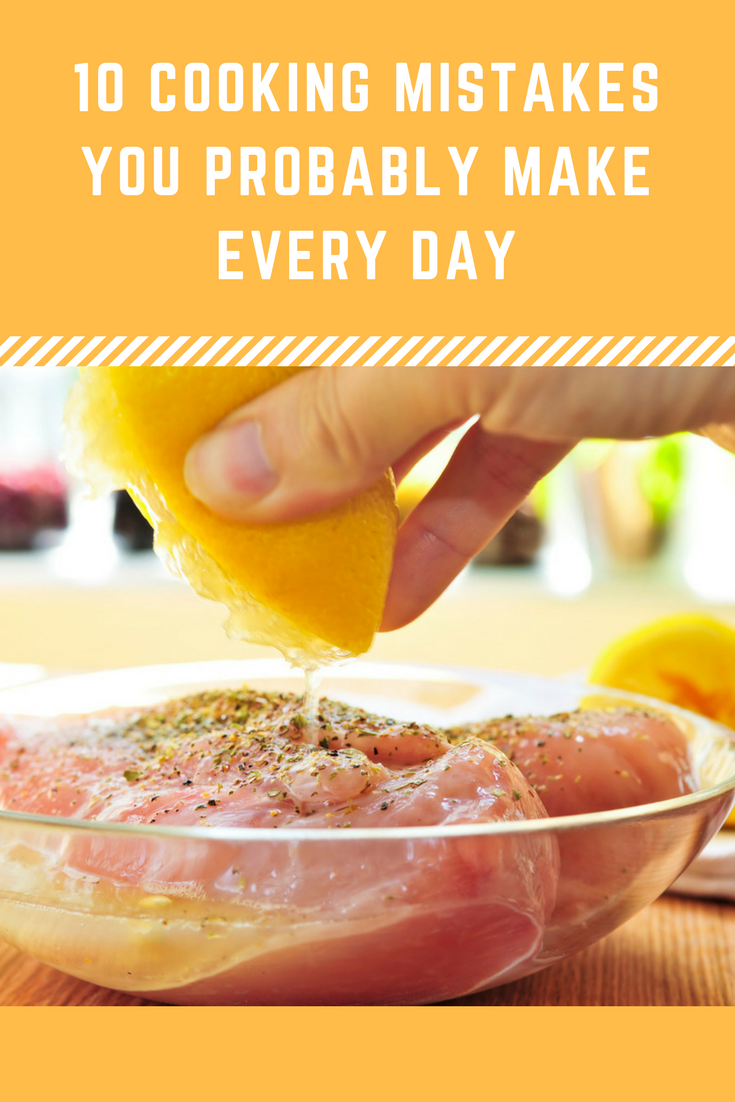 If you think everything you know about cooking is true, well it’s not. There are many myths that persist in the culinary world. There is a big chance you’ve encountered at least one already. Discover 10 cooking mistakes most people make. You will become a better cook after reading about these common mistakes.

Scrambled eggs aren’t very hard to make and they only require a few ingredients. If you’ve added milk or cream into your eggs, know that you’ve made a cooking mistake. Milk products added to scrambled eggs can make cooking your eggs take longer since you need to warm them up longer so the mixture can set. Anne Cori, the chef from the Kitchen Conservatory, suggests adding thick cream when the eggs are almost cooked for a richer taste.

Steak lovers have discussed cooking steak since the beginning of time. On one side, you have those that believe you should leave your steak on the grill until it’s ready to be flipped. On the other side, there are also some that say you can still get a perfect steak if you flip it more than once. In their view, flipping a steak will help cook it more equally.

Annette Zito, cookbook author and creator of the recipe website KitchAnnette, agrees with the ‘one flip side’ people. Cori is in agreement with this method also. They believe that the best steaks are only flipped once. “Let the steaks cook on one side for the amount of time you want, flip them and let them cook until you preferred cooking”, advises Zito.

It is smart to add oil to your boiling water when you’re cooking your pasta – pasta has a tendency of sticking together right when you put them in the water, so oil can prevent that. Avoid adding oil to cooked pasta because this prevents the sauce from sticking. Cori is strongly against adding oil to your cooking pasta: “sauce doesn’t stick to slippery pasta”. The simple solution is to stir the pasta until they are cooked enough for them not to stick together.

4. The spiciness of peppers comes from the seeds

5. Oat groats are the best type of oat

In 2010, oat groats became a kind of ‘trendy food’. Other kinds of oats seemed boring. But is the oat groat variety that different from it’s rolled oat cousins? While oat groats have a slightly lower glycemic level, the only real difference between oat groats and other types of oats is how they are processed. In short, oat flakes are only oats in a different shape.

6. You can soften butter in the microwave

What do you do when you forget to take out the butter from the fridge for it to soften before adding it to your recipe. The easiest and quickest solution is to put it in the microwave, but butter softened in the microwave could, unfortunately, ruin your recipes. When butter gets to a certain temperature, it does not cream as well as it should. “Never put butter in the microwave because you could emulsify it”, explains Cori. A microwave will not soften your butter uniformly and this will affect your recipe.

7. You can skip the browning phase when making stew

Most stew recipes ask you to brown the meat before adding other ingredients, but all home-chefs don’t really understand why this step is so important. If someone has ever told you to skip this step, forget their advice. This step really does add a ton of flavour to the meal you want to make. “Not only will this add flavour to the cooking, but if you skip this step, you will have some pieces that are cooked by the steam that won’t be any good”, explains Zito.

Know that you can make French toast with any kind of bread you want and if you only have white bread at home it will still satisfy your craving. However, white bread is the worst bread to use because it is too fresh and soft. The point of French toast is to use old, stale bread since it absorbs the mixture well and then makes it soft.

9. You can make guacamole in advance

Guacamole doesn’t take a long time to make, but it can be tempting to make it in advance when you’re having people over. You should never prepare your guacamole in advance because no matter how much lemon juice you add, it won’t stop the avocado from slowly oxidizing. If you have to make your guacamole in advance, invest in a good airtight container and make sure there is practically no more air between the guacamole and the lid. You can also cover the top of it with some lemon juice and put some plastic wrap on top to prevent the air and the avocados from reacting.

Cooks use marinades to make different flavours enter their meat before cooking it, but some think that marinades also tenderizes the meat. However, this is not true because most marinades don’t enter the meat deeply enough to have an important enough effect on the texture. “Marinades are made to add flavour”, explains Cori. “The only marinades that can tenderize meat are marinades with yogourt or papaya”.